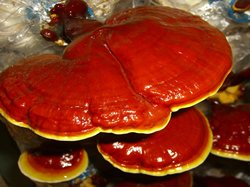 Reishi mushroom contains complex sugars known as beta-glucans that stop the growth and prevent spreading of cancer cells. When animals were fed beta-glucans, some cells of their immune system become more active. Limited data from clinical studies suggest Reishi mushroom can strengthen the immune responses in humans.
In addition, reishi mushrooms contain sterols that can act as precursors to hormones in the body, along with substances called triterpenes that may have blood pressure-lowering and anti-allergy (anti-histamine) effects. Reishi mushrooms have also been shown to slow the process of blood clotting.

Reishi mushroom can cause toxicity in some immune cells. More studies are needed to show that it is safe and effective for cancer treatment.

Do Not Take If
Side Effects

Case Reports
Two cases of liver toxicity, resulting in death in one case, have been reported with use of powdered reishi mushroom.
A case of chronic diarrhea was reported in a 49-year-old man with non-Hodgkin's lymphoma following long-term use of a powdered extract of reishi mushroom.

Reishi mushroom is a fungus that holds an important place in the traditional medical systems of China, Japan, Korea and other Asian countries for its health promoting effects. It is used as an immunestimulant by patients with HIV and cancer. The active constituents are thought to include both beta-glucan polysaccharides and triterpenes.
Extracts of reishi were shown to have immunomodulatory (2) (3) (4) (5) (12), renoprotective (9), anti-inflammatory (36), and hepatoprotective (37)properties both in vitro and in vivo.
Clinical studies indicate its benefits in improing lower urinary tract symptoms (LUTS) in men (10) (20), and in exerting mild antidiabetic effects and improving dyslipidaemia (29).

Reishi has also been studied for its anticancer potential. In vitro and animal studies indicate that it has chemopreventive effects (21), alleviates chemotherapy-induced nausea (13), enhances the efficacy of radiotherapy (22), and increases the sensitivity of ovarian cancer cells to (27). It may also help prevent nephrotoxicity (28).
In small clinical studies, reishi increased plasma antioxidant capacity (6) (7), and enhanced immune responses in advance-stage cancer patients (8). Remission of hepatocellular carcinoma (HCC) was reported in a few cases in a single study (23). However, further research is needed to establish use of reishi as an anticancer agent (30).

An in vitro study reported that reishi mushroom extract has toxic effects in leukocytes (14). More research is needed to determine its safety and effectiveness as an adjunctive cancer treatment.

In other studies reishi increased plasma antioxidant capacity (6) (7) and enhanced immune response in advance-stage cancer patients (8).
Its extracts also inhibited 5-alpha reductase, an important enzyme that converts testosterone to and is upregulated in benign prostatic hyperplasia (9).