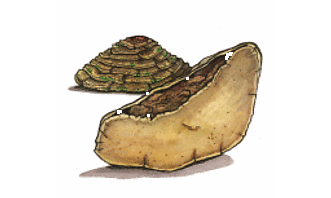 Phellinus linteus (PL) is a medicinal mushroom used in traditional medicine in Asia. Compounds present in this mushroom have anti-inflammatory and antitumor properties. Large scale studies are needed to confirm these effects.

Although PL is used as cancer treatment in Asia, large scale clinical trials are lacking. A few cases of regression of liver and prostate cancer have been reported. Such observations need to be confirmed in clinical studies.

PL use resulted in worsening of an autoimmune condition called pemphigus that is characterized by blisters on the skin and mucous membranes and by itching or burning.

Phellinus linteus (PL) is a yellow, bitter-tasting mushroom that grows on mulberry trees. It is used in traditional medicine in Asia where it is often mixed with other medicinal mushrooms, such as Reishi and Maitake, and promoted as an adjunctive treatment during cancer therapy. Some preparations of PL are used to prevent wrinkles and aging but clinical evidence is lacking. The polysaccharide-protein complexes found in PL were shown to have immunomodulating effects (1). The polyphenolic constituent demonstrated anti-inflammatory properties, which may protect against injury and other syndromes involving infarcts, hematomas or hemorrhages in animal models (2) (3). Other constituents, such as interfungins A, help prevent protein modification in hyperglycemic state, and may benefit diabetics (4).
PL is being researched for its potential chemoprotective effects. A number of in vitro and animal studies suggest that it has anti-angiogenic, antioxidant, and xanthine oxidase inhibition properties (5). Anticancer effects against breast (6) (7) (8), colon (9) (10), liver (11), lung (12) (13), oral (14), prostate (15) (16) (17) and skin cancers (18) (19) (1) have also been reported. While there are case reports of tumor regression following consumption of PL (11) (20) (21), large scale clinical studies have yet to be conducted to examine its efficacy as a cancer treatment.

The polysaccharide-protein complexes found in PL have immunomodulating (1), anti-angiogenic, and antioxidant and xanthine oxidase inhibition effects (5). Additionally, the furopyranone compounds inhibit protein glycation, which may aid in treatment and prevention of diabetic complications (4) (23). In non-obese diabetic mice, a polysaccharide extract from PL enhanced function of macrophages, dendritic cells, NK cells, T cells and B cells, prevented inflammation by inhibiting IFN-gamma, IL-2 and TNF-alpha by TH1 cells and macrophages; it also upregulated IL-4 expression in TH2 cells. These effects may help prevent diabetes (23). The anti-inflammatory activities of inotilone, a compound isolated from PL might be due to reduced levels of malondialdehyde (MDA), inducible nitric oxide synthase (iNOS), COX-2, NF-κB, and matrix metalloproteinase (MMP)-9, and via increased activities of catalase (CAT), superoxide dismutase (SOD), and glutathione peroxidase (GPx) through the suppression of TNF-α and nitric oxide (NO) (25). In another study, hispidin, a phenolic compound present in PL, was shown to protect against peroxynitrite-mediated cytotoxicity, DNA damage and hydroxyl radical formation (26).

Exacerbation of pemphigus (an autoimmune disorder) was reported following use of PL (24).